The picturesque Galaxidi alone is a wonderful attraction, which fills the eyes of the visitor from every aspect. So arm yourself with exploratory mood and a camera and visit some of the attractions that stand out.

Historic sites and Museums
– Carved tombs of the classical period in “Kalafatis” area
– Section of the ancient Wall near the beach, which protected the town of Galaxidi
– THE TOMB OF KING Locros which is assumed to be an early Christian catacomb
– THE NAUTICAL AND HISTORICAL MUSEUM of Galaxidi built in 1868 (recently rebuilt) hosts one of the richest collections in nautical instruments and paintings of sailing ships.
– THE FOLKLORE MUSEUM housed in a listed mansion and hosts local traditional costumes, embroidery and other exhibits.

– THE CHURCH OF SAINT NICHOLAS with the unique beauty and style, hand carved wooden temple
THE CHURCH OF THE HOLY FRIDAY with the extremely accurate sunflower – zodiac, which is carved on the church floor
THE BYZANTINE MONASTERY OF SAVIOR METAMORFOSEOS built in 1250 AD, in the hill of Holy Trinity (offers magnificent view of the town)

– St. George island (it has two chapels)
– Apsifia island (it has an iron lighthouse built in1887
– The Cave in Mamas square (used as the towns natural fridge and much later as a disco club)
– The picturesque harbor with its fishing boats and yachts
– The magnificent pine forest which surrounds the harbor
– The formation of the natural creeks who give Galaxidi the beauty of an island 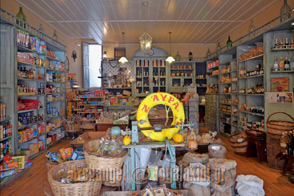